A range of cruising options

The purpose of this particular section is to provide you with information about the range of cruising options possible using Canaltime at Aldermaston as your base.

7 Nights • Cruising Time Per day: 6.5 Hrs • Locks: 90
• Cruise west to the picturesque market town of Newbury. There are some nice pubs at the canalside village of Kintbury.
• Before arriving at Hungerford, stop off and visit the antique shops and admire the charming canalscape.
• Then it’s onto Great Bedwyn and Crofton Pump Station, home to the world’s oldest working beam engine.
• Visit the historic conservation village at Wootton Rivers on your way to the traditonal village of Pewsey with its beatiful thatched cottages.

7 Nights • Cruising Time Per day: 7 Hrs • Locks: 48
• Join the River Thames at Reading and cruise to Oxford the city of dreaming spires.
• With its mix of ancient and modern there is plenty to do in Oxford

14 Nights • Cruising Time Per day: 6 Hrs • Locks: 175
• This ring takes a minimum of 2 weeks to complete or longer if you want to take in the sights along the way.
• The Thames River Licence price is included in your hire charge.
• Take in the delights of the southern waterways including Oxford, Banbury, Leighton Buzzard, but then follow a similar route to Limehouse and return for another aspect.

• A short cruise to Reading, where you join the Thames and cruise downstream through the rowing town of Henley, the charming town
of Marlow, where Shelley and T.S. Eliot once lived, and Cookham, home to the Stanley Spencer art gallery.
• Moor up at Taplow for a visit to Cliveden House and, if your budget is up to it, at Bray, where you could enjoy a fine meal at either Heston Blumenthal’s Fat Duck or the Roux brothers’ Waterside Inn.
• Visit Eton College before arriving at the royal town of Windsor, famous for its castle, and nearby Legoland.

14 Nights • Cruising Time Per day: 6.5 Hrs • Locks: 176
• Head down the Kennet & Avon and follow the route to Pewsey, then down to Devizes and the Caen Hill flight of locks.
• From our Hilperton Marina pick up the Bath and return route.
• On the Kennet & Avon you will be able to see two surviving turf-sided locks, Monkey Marsh lock at Thatcham and Garston Lock at Theale.

10 Nights • Cruising Time Per day: 8 Hrs • Locks: 114
• If you have more time to explore into London then this route will take you up onto the River Thames, past Henley, Marlow, Hampton Court Bridge, Teddington, then onto the Grand Union Canal up to Little Venice, London Zoo and Camden market.
• At Henley you could visit The River and Rowing Museum , you will pass Runnymede near Egham which is notable for its association with the Magna Carta and current collection of memorials, or at Staines there is Thorpe Park.

3 Nights • Cruising Time Per day: 5 Hrs • Locks: 22
• Cruise to the picturesque market town of Newbury, which boasts some lovely 17th century buildings or spend a day at the races. 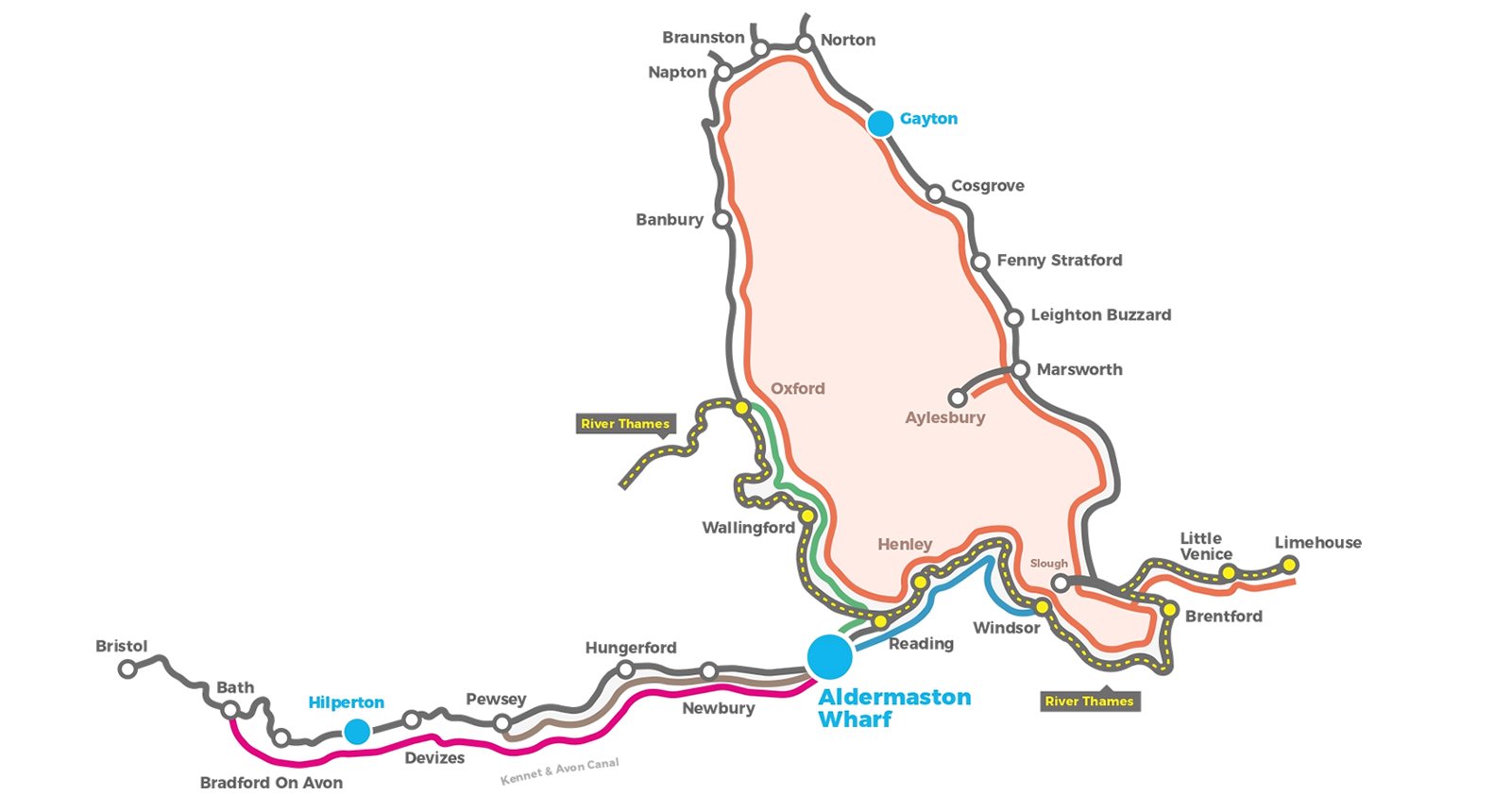